Young Enterprise is the United Kingdom's largest business and enterprise education charity.  Every year their wide range of educational programs help over 250,000 young people learn about business and the world of work in the classroom under the guidance of a network of 5,000 volunteers from 3.500 companies.  Lots of new skills can be developed such as: working in a team, leadership, time management, communication and planning, to name a few.

Delivered across an adacemic year, young people make all the decisions about their company, from raising the initial share capital throught o desiging their product or service to selling directly to customers and ultimately winding up the company and paying their taxes. All this takes place with the support of a Business Adviser who brings a wealth of business knowlege and expertise to the team.

Students can also choose to set up their business as a social enterprise, which focuses on addressing a social need rather than maximising profit. 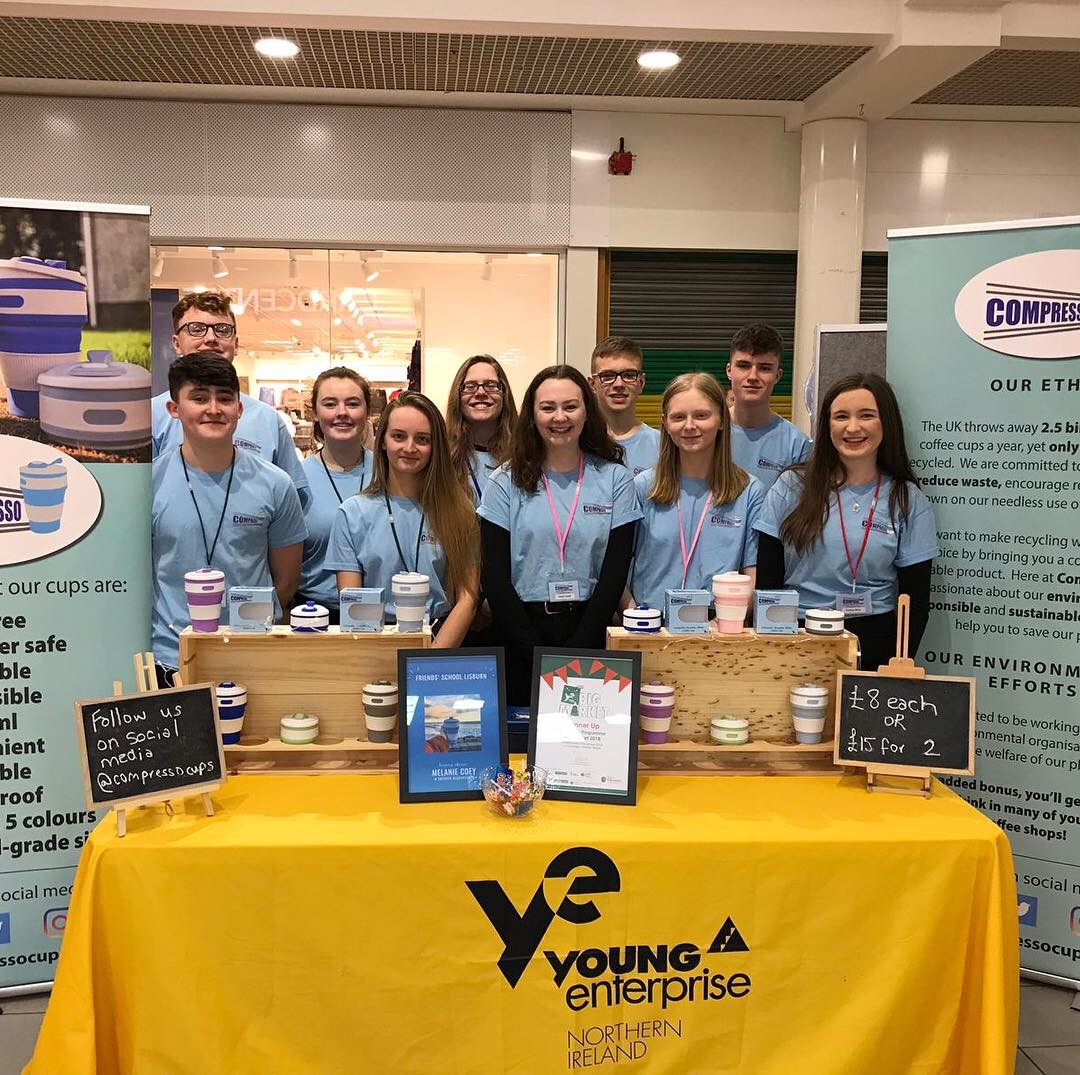 The young enterprise team @compressocups was made up of 11 Year 13 pupils. The roles were assigned as follows:

They wanted their product to be as environmentally friendly and sustainable as possible. It was identified that two and a half billion disposable coffee cups are being thrown away every day. To tackle this problem, Compresso wanted to provide people with an alternative that is convenient and perfect for travel. Their product was a collapsible, reusable coffee cup, which folds down to one third of its original size after use.

They won a number of awards including 2nd palace at the St George’s ‘Big Market’ event, were they competed against companies from all over Northern Ireland. They also won the Digital Presence Award and Runner Up overall at Bloomfield Shopping Centre Regional Competition. This meant they were one of the top eight companies in Northern Ireland through to the final.

Following their success, three members of our team went to Vienna with Young Enterprise and Junior Achievement Austria to sell their cups across Europe. They presented their cups to companies from all over Europe and made connections with various social media influencers to market our product to their followers.

Alongside that they were in talks with the Belfast Coffee Club to get their cups into six independent coffee shops around Belfast. They got endorsements from people such as the Minister for Education in Ireland, TD Joe McHugh, and we were selling around the world with our cups making it to Canada, France, Russia, Austria, as well as the UK and Ireland. 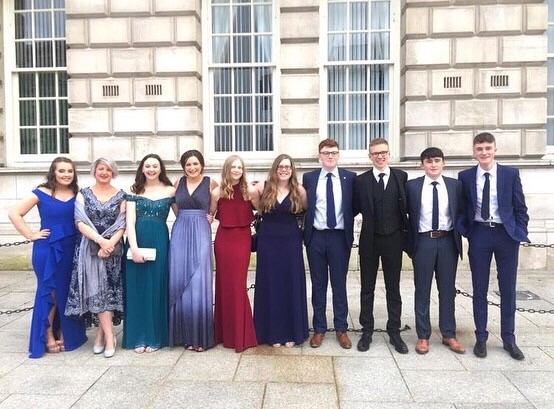 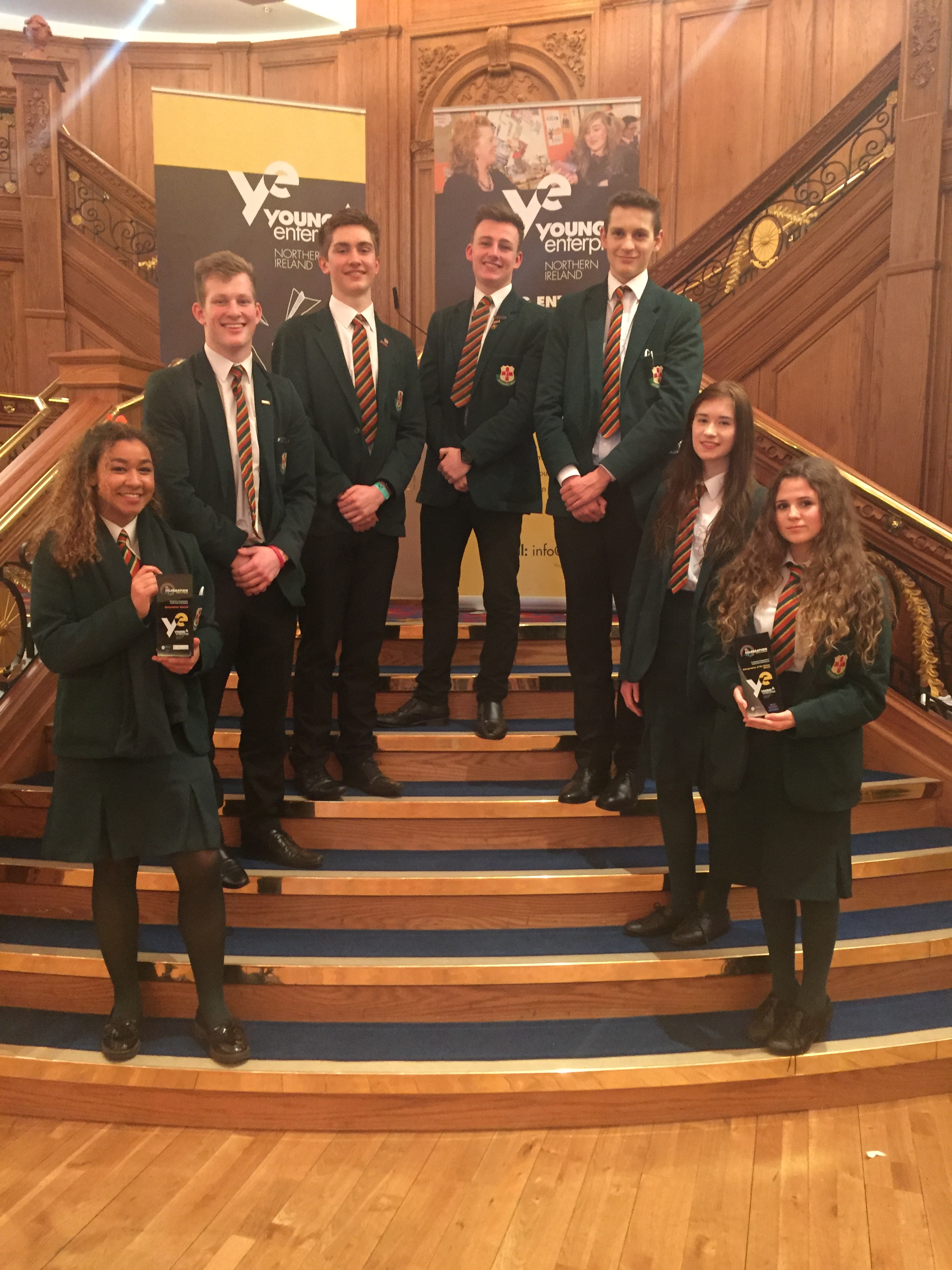 The pupils designed their book from start to finish, creating a children’s activity journal which allows a child to interview and complete activities with their parent and grandparent- enabling them to learn more about their family and the past in a fun and interactive way.

One of the marketing directors- Rebecca McNeill- also won the ‘Young Entrepreneur of the Future’ Award for the South Eastern area after an application process and interview.

With the help of business advisor, Roger Kennedy and supervising teacher, Ashea Bell, the team were set for success in learning what it takes to run a business outside of the classroom. To find out more, visit their website generationfsl.squarespace.com. Also find us on twitter and facebook.

The Young Enterprise team, ‘Actikids’, after being crowned Northern Ireland Company of the Year, won two awards in the United Kingdom wide finals, held in the British Film Institute, Southbank, London, on 2 July.  Managing Director of ‘Actikids’, Jake Lewis, was announced as the winner of the prestigious Founder’s Award.  The Award, presented in memory of the Young Enterprise Founder, Sir Walter Salomon, is presented to a student from one of the twelve regional finalists’ companies who demonstrates exceptional leadership potential.  The award, consisting of a trophy and certificate, was presented to Jake by Sir Walter Salomon’s daughter Carolyn Townsend.

The award is fitting recognition of the outstanding role Jake has played this year in leading the Friends’ team to success locally and nationally.

The team then won a second award, the GKN Production Award, for their skill in putting together their highly successful children’s activity journal.  The award recognises excellence in production of a Young Enterprise company’s product or service and is judged on the basis of the quality of production design and development, quality and innovation.  It is many years since a team from Northern Ireland has won one award at the finals, let alone two, and it is a wonderful achievement for all the team members.