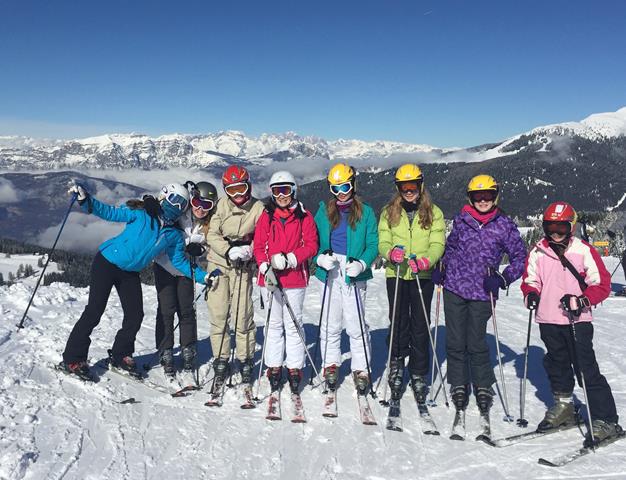 Pupils of Friends' School Lisburn recently embarked on the Junior Ski Trip. Students in Years 9-11 flew from George Best Belfast city airport to arrive in Verona, Italy for the 2016 Ski Trip. Arriving in Verona in the evening the pupils then took a bus to their home for the next week, the Park Hotel Miramonti, in the beautiful village of Folgaria situated just a short distance from the ski area.

Having been fitted for ski gear the previous night the ski lessons began! For many this was a first time experience meaning there were several beginner groups, an intermediate group and an advanced group. The first full day on the slopes resulted in everybody having a great time, but more importantly getting used to the snow and skis. The beginner groups began on the nursery slope and learnt how to stop, turn and stay upright, while the others enjoyed the scenery of the slopes further up the mountain. As the week progressed all groups enjoyed skiing down the mountain on various different slopes of different grades and difficulties.  After morning lessons everyone had the chance to choose their lunch for the day, pizza was consumed in large quantities along with hot chocolate that was almost too thick to drink! The weather was almost too good to be true, there was snowfall for the first time in several weeks and also the highest temperature of 15 degrees Celsius on the slopes so the conditions were excellent! There were various après ski activities arranged in the evenings which included snow tubing, ice skating, swimming, movie night and trips into the nearby town of Folgaria. The activities were enjoyed by all, especially after a hard days skiing. On the last day a series of races where arranged in each group involving a slalom course. The winners were announced and awarded prizes on the last day, along with everyone else receiving their badge and ski report. By the end of the trip everybody was so confident in their skiing you wouldn't have known they had been beginner's just five days ago. The trip was thoroughly enjoyable and everyone returned safely looking forward to a good lie in the following morning. Special thanks go to the staff for being so patient and thoughtful and to the hotel staff and to the ski instructor's for making the week so enjoyable.