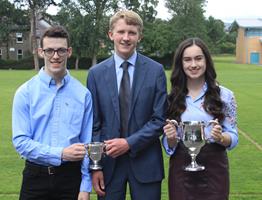 Speech Day was held at Friends’ School on Friday 7 September, when certificates and progress files were handed out to those who had completed AS and A-level examinations in 2018. The Guest of Honour was Neil Gibson, media commentator and Chief Economist for all Ireland at Ernst and Young. Neil was previously involved with Oxford Economics and was also head of the Northern Ireland Centre for Economic Policy at Ulster University.

Pictured: Friends’ A level students Matthew McKinnon and Jonathan Edwards received the Greer Cup and Georgia Edmonds was awarded the Manly Haughton Cup for top performance in their A Level examinations.

The Chairman of the Board of Governors, Philip McDonagh opened proceedings by congratulating pupils on their achievements and thanking the staff of the School for their hard work over the past year. He said that the recognition the school had received in being named the Sunday Times Northern Ireland Secondary School of Year was affirmation of everything that had gone on in school, not just the excellent results. However, he added that success did not mean that everything was straightforward, and highlighted the current financial situation which was making life difficult not just for Friends’, but for schools across the country. He said that a government at Stormont was urgently required, and appealed to parents to do what they could to persuade elected representatives to address the funding crisis in education immediately. He said that whatever the difficulties, everyone at Friends’ would continue in their work:

“In all this we are determined to protect the tremendous work that goes on in our classrooms, to keep investing in the School to ensure that it is a safe and happy environment for everyone and of course to maintain the caring Quaker ethos on which the School is founded. We want to continue to make school better in spite of the circumstances. In six years’ time, in 2024, it will be the 250th anniversary of the School which opened in 1774, and we are determined to celebrate this anniversary in an appropriate way.” 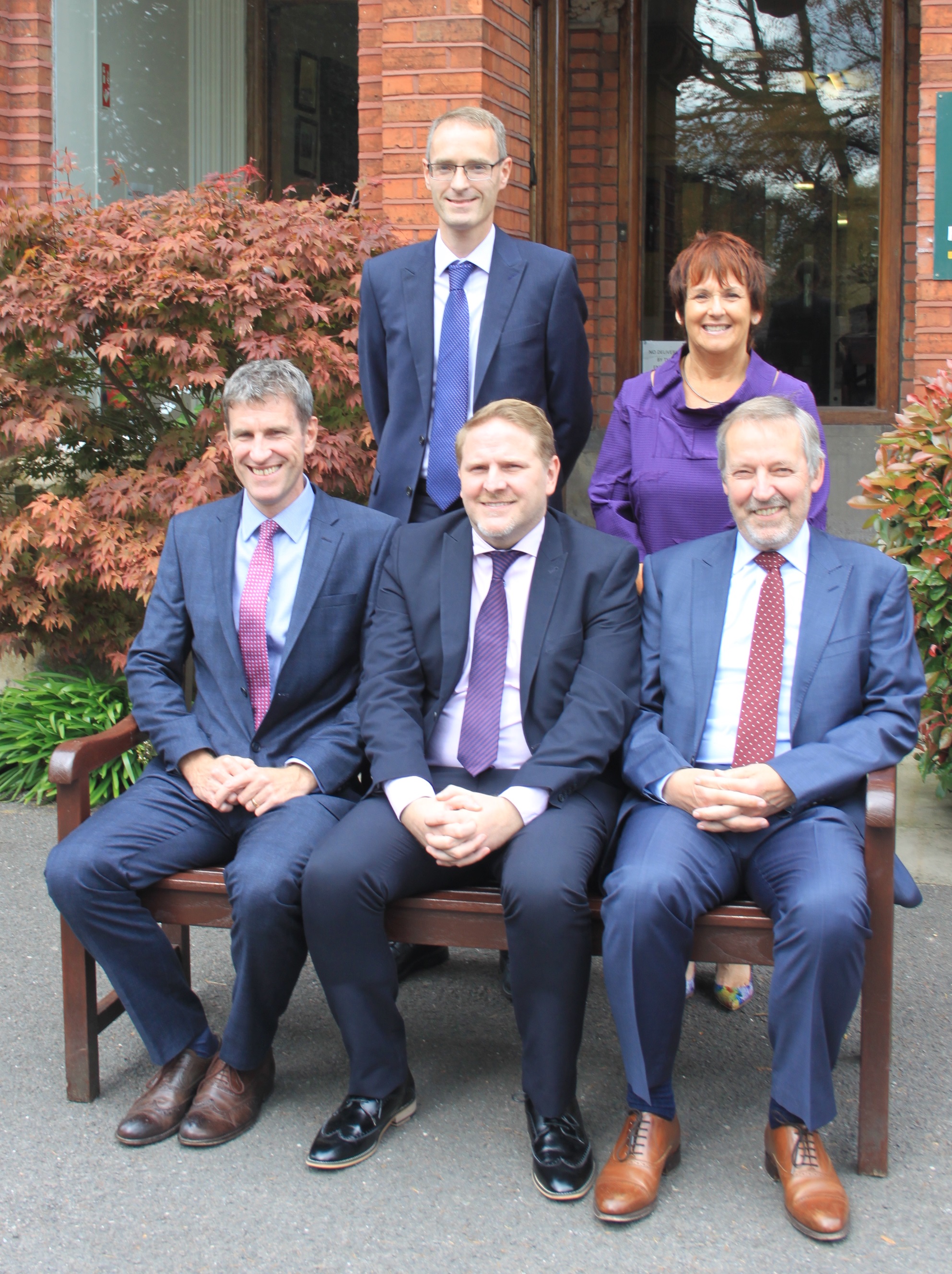 Neil Gibson received a warm reception and gave an inspirational and highly enjoyable speech to those gathered in the assembly hall. He spoke humorously of his own school days, saying that he did not receive any accolades for sport and music, and that he was one of the few people to be pleased that forgotten PE kit meant the opportunity to do some extra maths. He also described how setting up a war games club had given him some of the skills he would later use as an economist.

Neil Gibson told the audience that as well as academic results, people required empathy and responsibility if they were to be successful in the world of work. They needed to understand what was important to others and what motivated them. He also highlighted the importance of humility, respect and leadership. He said that, even in a changing world, he was confident that there would be jobs in every field for people who were motivated, innovative, hardworking, creatively minded, energetic and helpful. He also emphasised that every job was important, although some did not get as much recognition as others.

At the end of his speech, Neil encouraged pupils to explore what they were good at and what they enjoyed, and left them with the challenge of using their talents and abilities to make the world a better place. Andrew Edgar and Lucy Fitzpatrick received the Sinton and Dunwoody Prizes in recognition of their services to Friends’ School.

Stephen Moore, Principal, welcomed new members of staff and thanked those who had moved on, including Lorraine Burch, the Leavers’ Year Teacher, who had retired from the HE department in June. He added his thanks to the current staff at Friends’:

“I want to acknowledge the excellent work done by their teachers, particularly, as the Chairman has already said, at a time when conditions are challenging. The staff at Friends’ go beyond what they are required to do, ensuring that our pupils are put first, and we are all indebted to them.”

The Principal went on to highlight the School’s performance in examinations:

“141 pupils sat AS level exams this year – it is perhaps not surprising that there were so many, considering that this cohort achieved our best ever GCSE results in 2017. 41 of these pupils achieved three or more As, and of these, 14 pupils scored 4 As: Rachel Acheson, Kathryn Allen, Katie Bowden, Abby Davidson, Matthew Diamond, Zoe Dickey, Joshua Lindsay, Cameron Loan, Taylor Lunney, Dylan Morrison, Luke Scholfield, Emma Stephenson, Conor Taylor and Louise Treacy. And overall, grades were very pleasing, with 42% of entries at A, 70% at A-B and 86% at A-C.

“Results at A2, in what was a new specification, were excellent: 89% of our pupils achieved 3 or more A-levels at A*- C. Five pupils gained 3 or more A* grades - which is no mean feat, as to achieve this standard, candidates have to gain more than 90% in their A2 modules. Georgia Edmonds finished with 5 A*s; Matthew Mackinnon and Jonathan Edwards both achieved 4 A*s; and David Cleland and Peter Fox each obtained 3 A*s and one A. In total, 33 pupils achieved 3 or more grades at A*/A, and overall, the quality of entries was very pleasing, with 13% at A*, 45% at A*/A, 78% at A*/B; and 95% at A*-C.

“The list of Leavers’ destinations makes fascinating reading and shows the diversity of interests amongst our pupils. Many will be entering very competitive courses at top universities, including Georgia Edmonds, who will go up to Cambridge to read Natural Sciences; Jonathan Edwards, who also has a place at Cambridge for Engineering; and Lauren Irwin, who will read Earth Sciences at Oxford. We wish everyone well as they move to the next stage in their education, or in their lives, and I look forward to hearing of their adventures and successes in the future.”

The Principal said that the past academic year had been a memorable one, beginning with the school production of "Annie", which had involved almost 200 pupils from Year 8 through to Year 14. He reported that it had been a great year for Friends’ but that one week in March stood out above the rest:

“There was a real sense of community, with so many pupils either directly involved or lending support to their friends, and everything seemed to come together. And it was no accident: what we saw was pupils from across the school enjoying the rewards of the hard work they had put in all year in sport and in music. It began when the Senior Boys’ Badminton team won the League and Cup double. The following Monday, in girls’ hockey, the 2nd XI defeated Rainey Endowed 2-1 in the final of the McDowell Cup and the next day, the 2B XI won the Gibson Cup with a 2-0 victory over Ballyclare High.

“There was a brief interlude from sport on Wednesday, when we visited a sold-out Ulster Hall for our Spring Concert. Many of the pupils here today were among the 250 or so whose exuberance, enjoyment and sheer technical accomplishment made the night one to remember.

“And then, to cap it all, came the Burney Cup Final on the Thursday evening. A large crowd, including pupils and parents past and present, gathered to watch the match under the lights at Stormont, where the boys defeated Sullivan Upper 2-1 to win the competition for the first time since 1978. It had been 40 years, but it was well worth the wait.”

Mr Moore paid tribute his predecessor, Elizabeth Dickson, and the Governors at the time who had had the boldness and foresight to put down the hockey pitches at Friends’ and said that, even in challenging times, it remained important to make such investments and prepare for the future.

The Principal finished by saying that the occasion marked a pivotal moment for the leavers, and one that was ripe with possibilities and opportunities. He encouraged them to make wise choices in the knowledge that, although they couldn’t control what would happen, what they had learned at Friends’ would help them to approach all eventualities with integrity and humility.

Head Girl Olivia Agnew and Head Boy Chris Kane thanked Neil Gibson for taking the time to come to Friends’ and, on behalf of the pupils, staff, parents and guests, expressed their appreciation for what he had said. Following the ceremony, pupils, parents and guests gathered in the Dining Hall for afternoon tea. 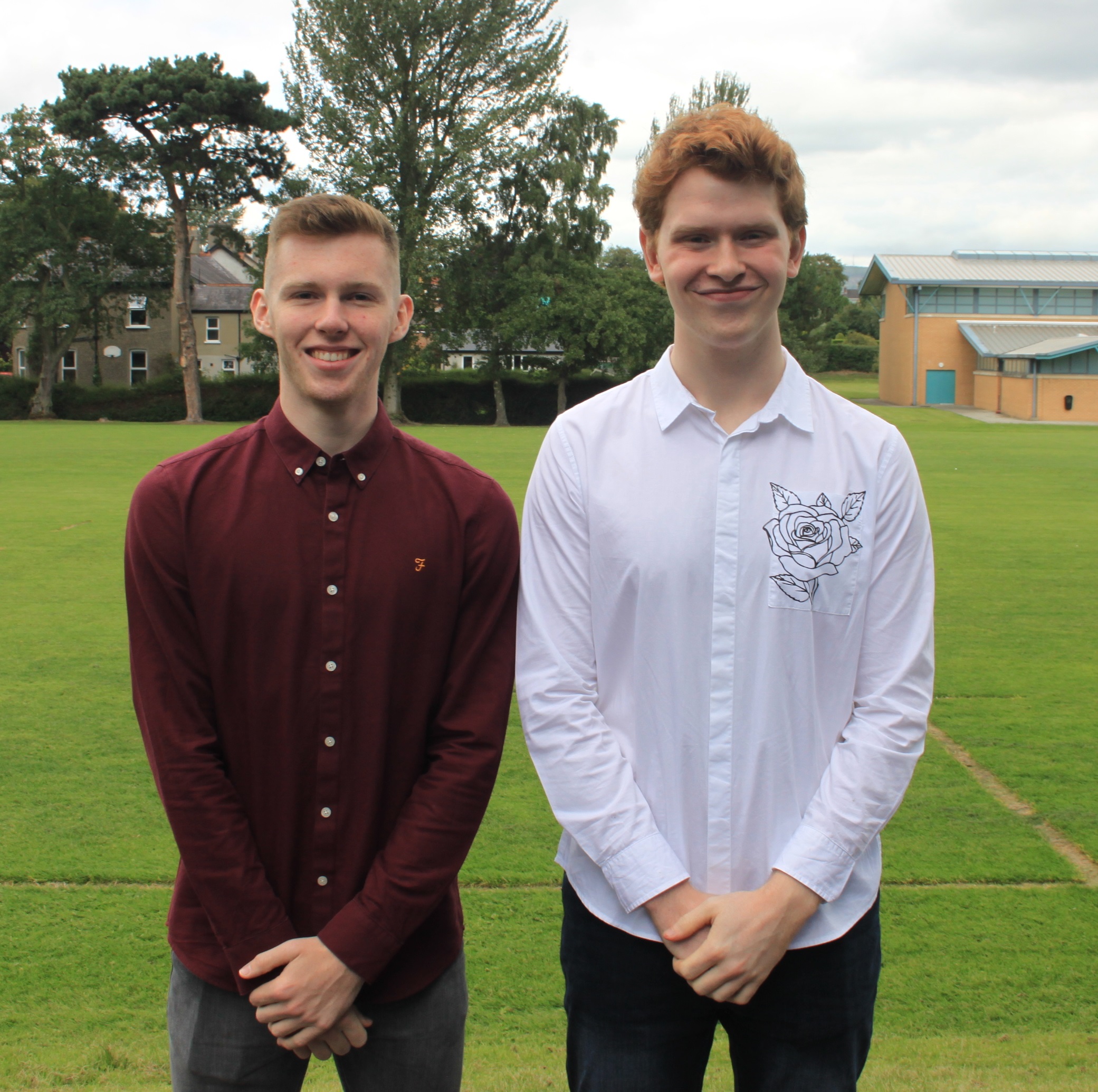 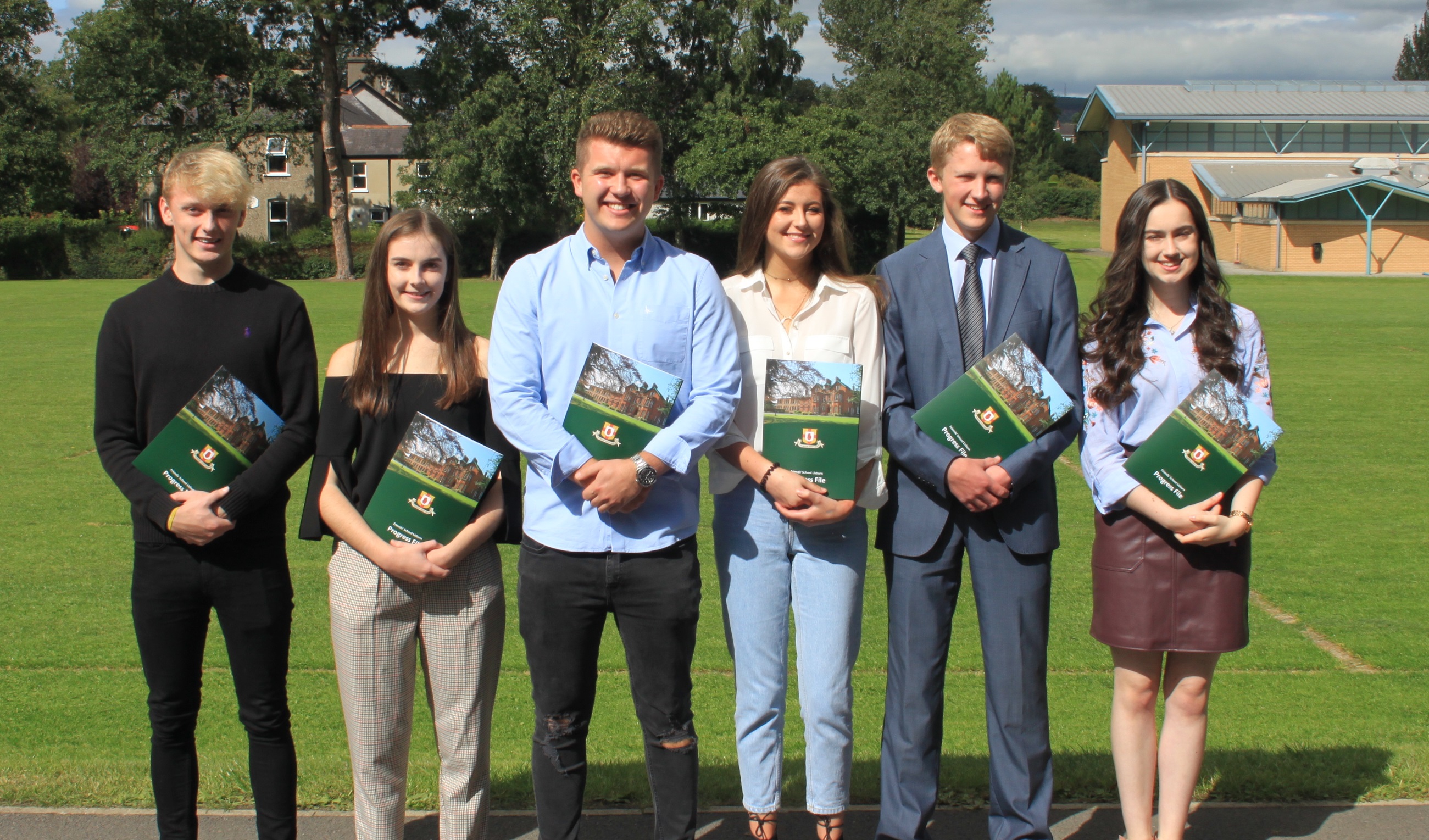 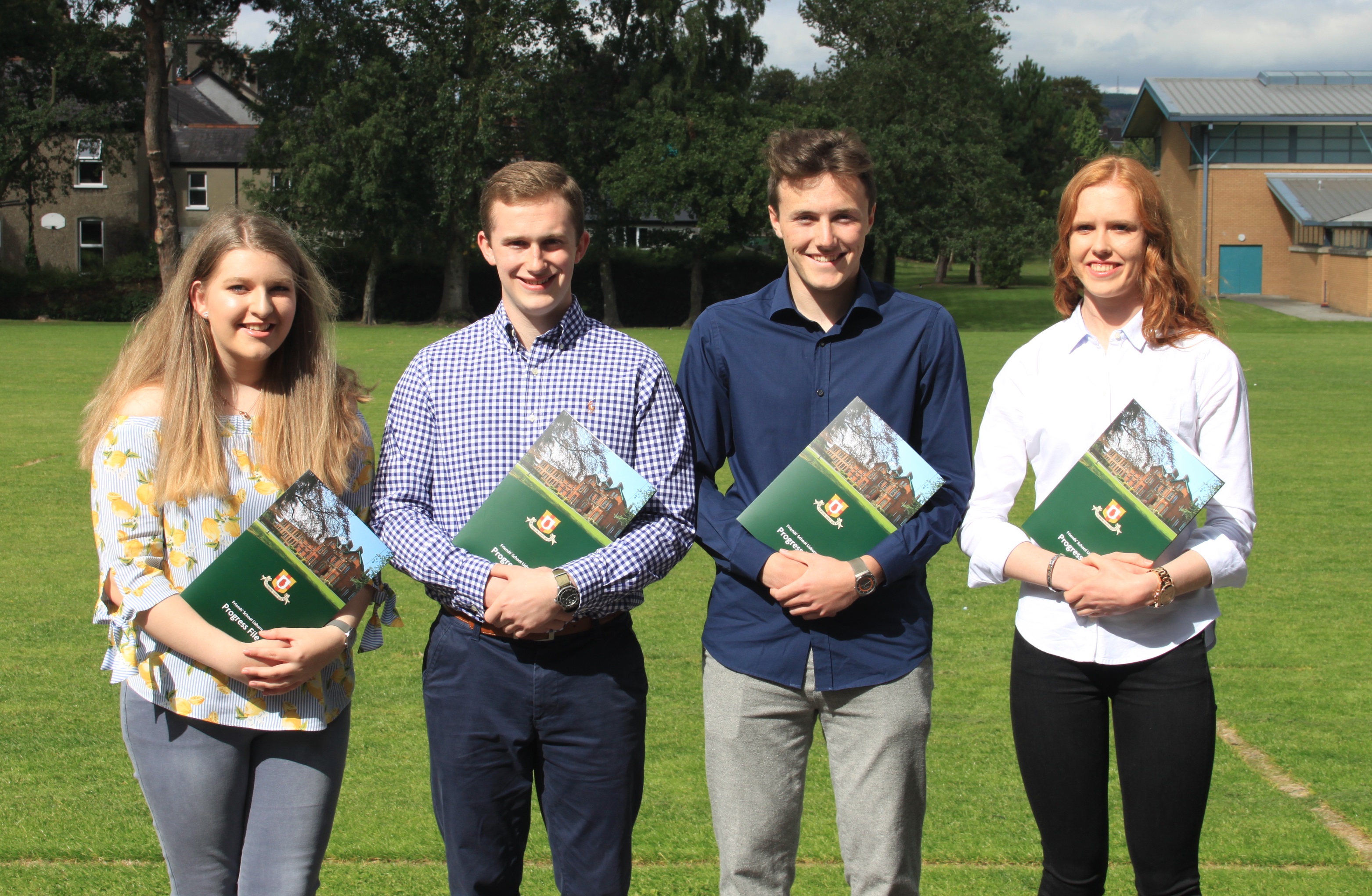 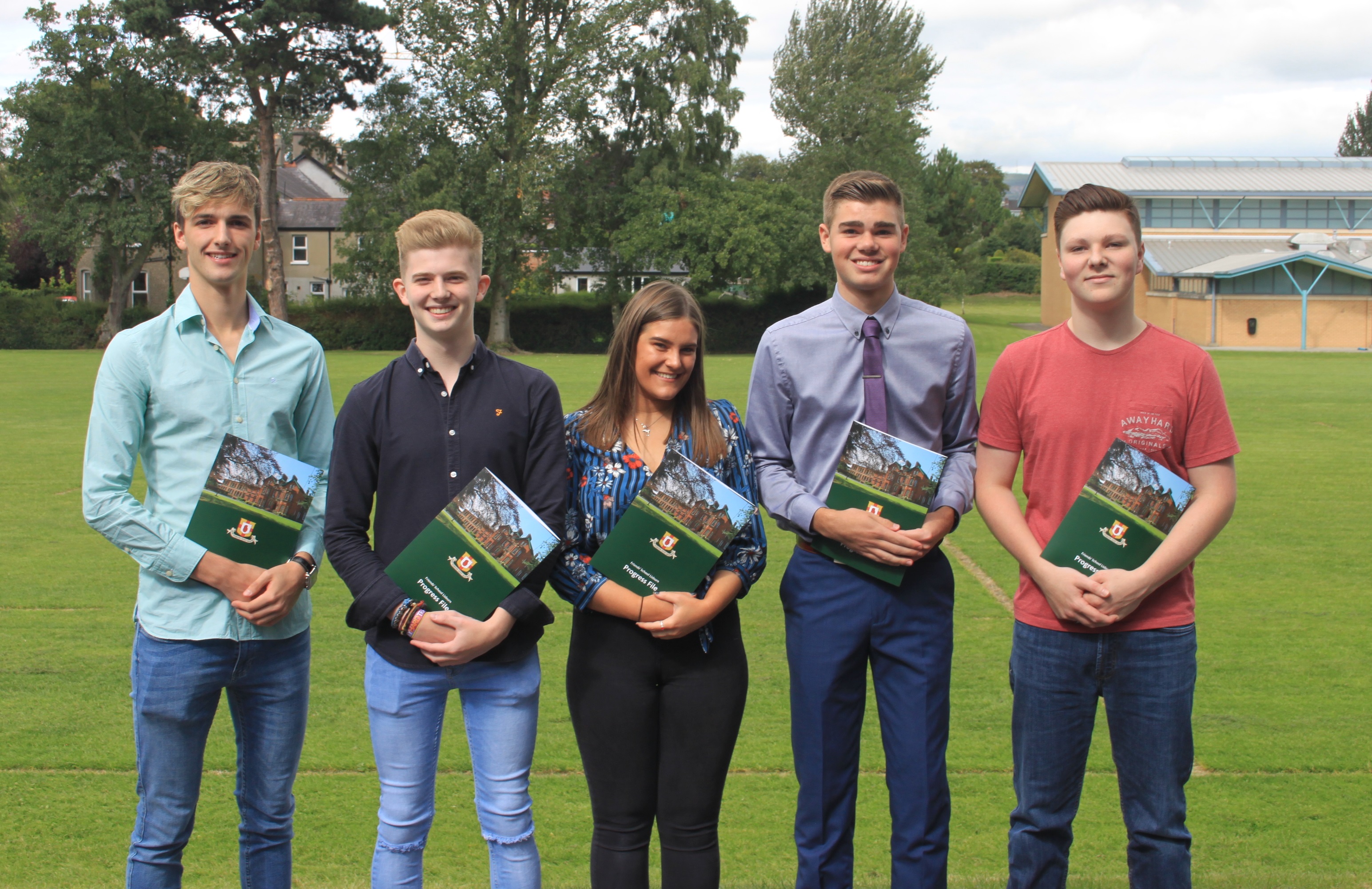 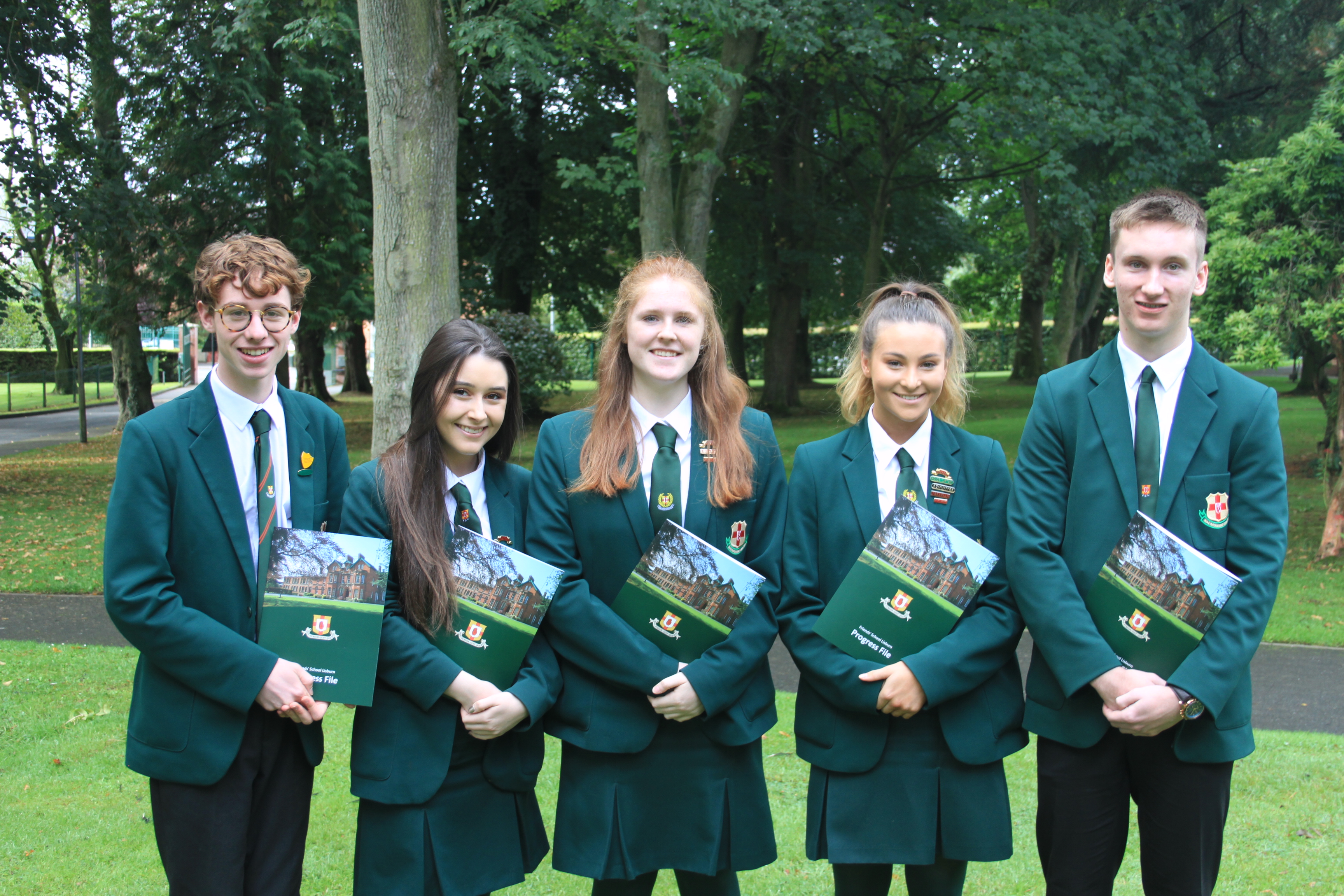 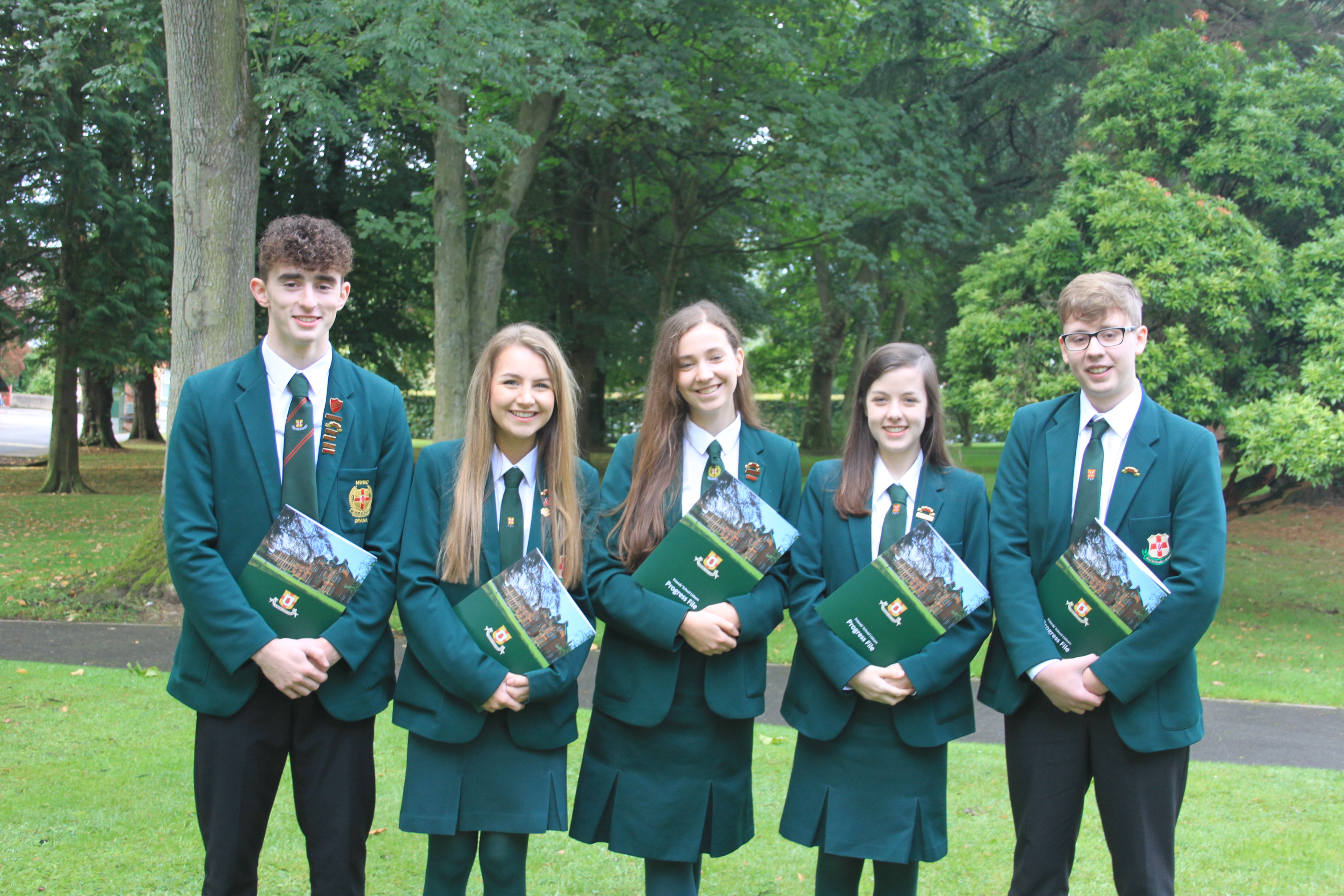 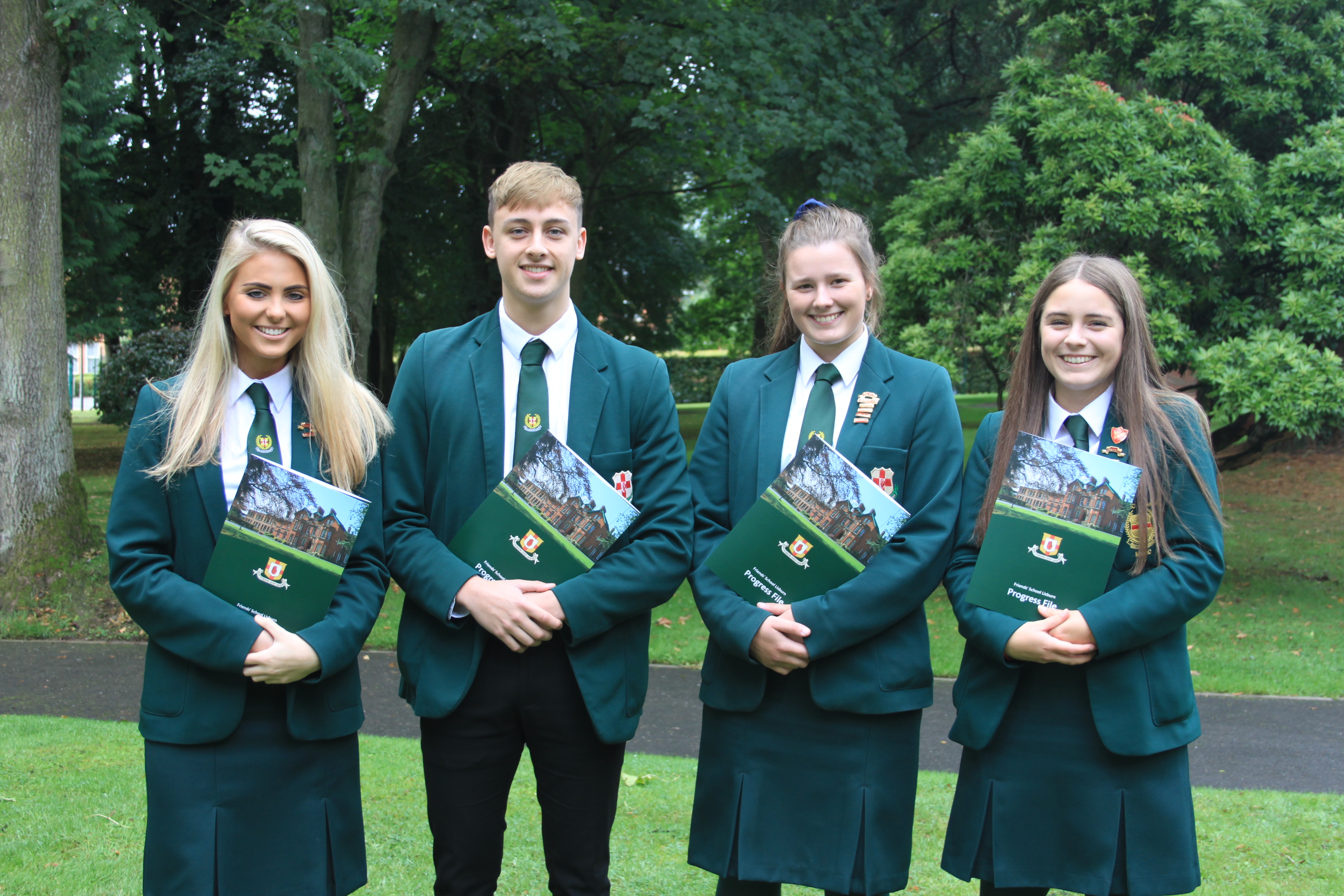 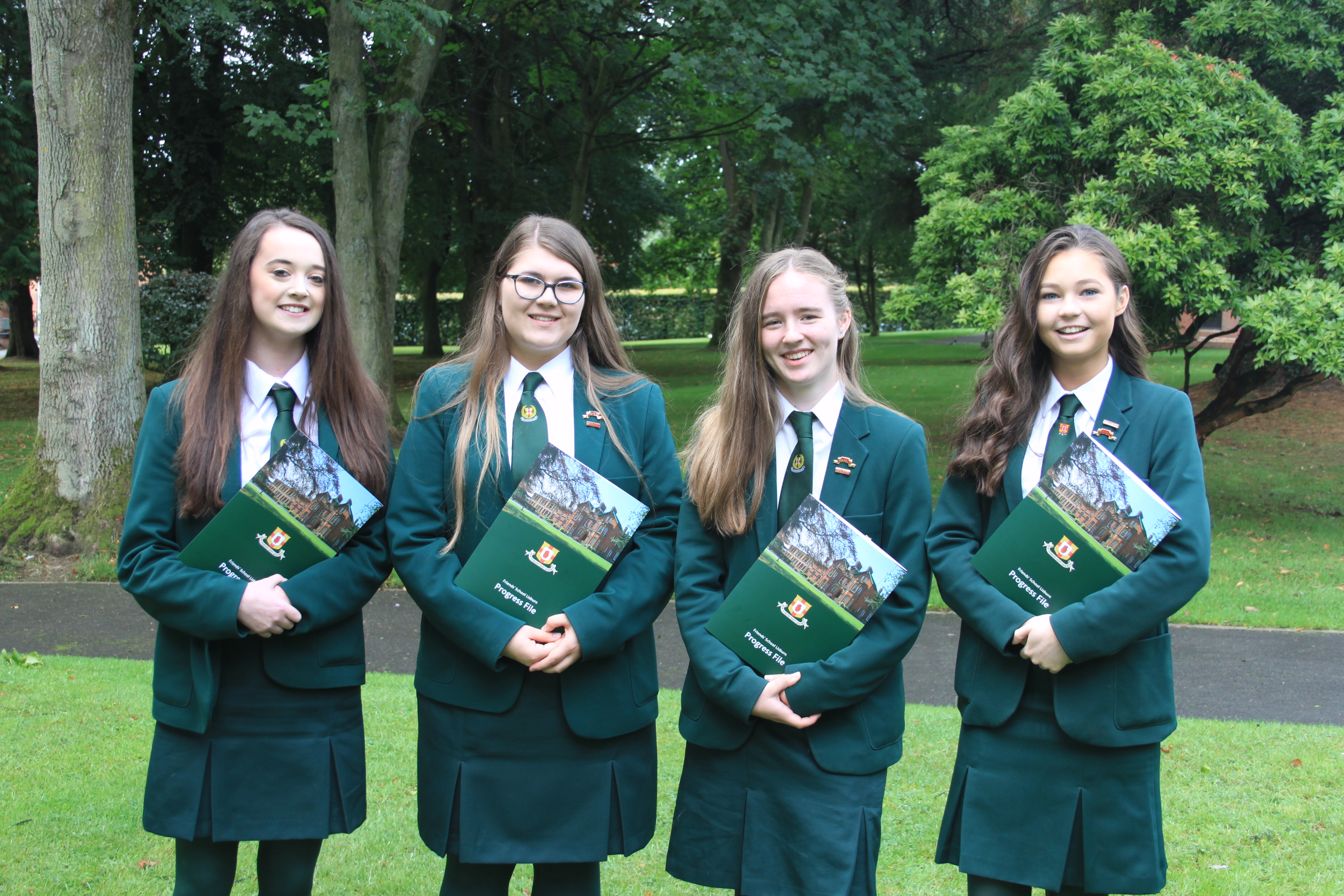