Past pupil Morag Tinto returned as Guest of Honour at Friends’ GCSE Reception where Old Scholars’ Prize winners received their awards for outstanding achievement at GCSE level. Pupis who all gained A* grades in each of their ten subjects include Ethan Millar, Frances Atcheson, Alana Rogan, Rachel Geddis, Kate Boomer, Lara Hatwell and Ross Little.

The Platform Party at the GCSE Reception:

Front row: from left, Philip McDonagh (Chairman of the Board of Governors), Guest of Honour, Morag Tinto and Stephen Moore (Principal).

Film director Morag Tinto, who had been Head Girl in 1998, received a warm welcome back to Friends’ School when she was the Guest of Honour at the annual GCSE Reception.  In a fascinating address, she talked about her experiences in the world of documentary making, and spoke about the film she is currently making with sculptor Antony Gormley on the origins of art.  She described her journeys to Europe and Asia to look at similar types of cave art that had sprung up independently at around the same time. Morag encouraged pupils to follow their interests, and said that each little decision was important: when she was at school it would have been impossible for her to envisage that she would be doing the job she is now doing.

After the reception, Morag joined parents, staff and pupils in the Dining Hall.  Some of those who had taught her and who had since retired, including former Principal, Elizabeth Dickson, were back in school and it was clear that they were delighted to catch up with her and hear of her experiences since leaving Friends’.

The Chairman of the Board of Governors, Philip McDonagh congratulated pupils on their achievements and thanked staff for their hard work over the past year.  He said that the recognition the school had received in being named the Sunday Times Northern Ireland Secondary School of Year was affirmation of everything that had gone on in school, not just the excellent results. However, he added that success did not mean that everything was easy, and highlighted the current financial situation which was making life difficult for schools across the country.  Referring to the NI Audit Office report on the Financial Health of Schools in Northern Ireland and the ongoing enquiry by the NI Affairs Committee at Westminster, he said that the schools’ budget had fallen by almost 10% over the last five years and that the government’s failure to take the difficult decisions had meant that important savings could not be realised. He said that a government at Stormont was urgently required, and appealed to parents to do what they could to persuade elected representatives to address the funding crisis immediately.

Stephen Moore, Principal of Friends’, spoke about the Friends’ pupils who had taken GCSE exams last summer, noting that, in awarding Progress Files and GCSE certificates to each one, the School recognised and valued the achievements, talents and interests of each individual, both within the classroom and beyond.

Mr Moore said that all of the pupils present should be congratulated on their success.:
“Collectively, this cohort of young people can be very proud of what they have attained at GCSE. Indeed, their results count amongst the best ever achieved by pupils at Friends’, and that is in itself an impressive feat, given the success we have had in the past.  A total of 138 pupils sat GCSEs in 2018, with 98% achieving the benchmark figure of 7 or more A*-C grades, including English and Maths.  32% of entries were awarded an A* grade; and 72% were at A*/A – both figures well up on our five-year trend and well above the Northern Ireland Grammar School average. It can be hard to appreciate the significance of statistics, but I do hope that we can acknowledge the scale of what these young people have achieved.”

Mr Moore said that it would be impossible to list all of the individual successes, but that it was appropriate to mention some individual achievements:

“A total of 40 pupils achieved 5 or more A*s, which represents a very high standard indeed; and 48, over a third of the cohort, achieved 10 grades at A*/A. Andrew Elwood, Jack Harte, Rachel Hemphill, Sarah King, Sophie Maxwell, Jack Netherton, Jade Pickering and Conor Quinn each achieved 8 A*s and 2 As; and four pupils – Aoife Doyle, Kathryn Glover, Ren Thompson and Hannah Wilson – achieved 9A*s and 1 A.  Old Scholars’ Prizes will be awarded this evening to a further seven pupils, who each had a perfect record of ten A* grades: Frances Atcheson, Kate Boomer, Rachel Geddis, Lara Hatwell, Ross Little, Ethan Millar and Alana Rogan. This shows remarkable consistency across a broad and challenging curriculum: all of these pupils sat Mathematics, English, English Literature, at least one Science subject and one Modern Language, as well as Religious Studies.”

Mr Moore said that he admired the way in which pupils were able to balance their commitment to academic success with their interest in a broad range of activities.  He said that the first term in Sixth Form had been a busy one with pupils involved in the School Council, the Charity Council, Young Enterprise and debating; he also talked about successes in the previous year in events and competitions, including the Maths Challenge, the award-winning school production of Annie and the Spring Concert.  He said that it was impressive that these last two events had each involved more than 200 pupils from across the school, and that those taking part exhibited not only technical accomplishment, but also enthusiasm and enjoyment.

The Principal also spoke of the wide range of interests the pupils enjoyed outside the classroom, and talked about individual and collective successes in a number of activities, including the music and sport.  He said that many of the current Year 13 had already made a significant impact on the senior teams in school in sport, including in cup victories in girls’ hockey for the 2nd XI and 2B XI, as well as the boys’ Burney Cup victory.  He said that the number of pupils with representative honours, particularly in boys’ and girls’ hockey, meant that there was much promise for the future.

“I know that these young people here tonight have the creativity, the drive and the ability to make a difference in our society. Their achievements thus far prove that they can compete with the very best from across the United Kingdom and Ireland, so they should have no hesitation in setting themselves bold and ambitious targets for what they wish to achieve. And, as they take a leading role in many of the enrichment activities we offer here, they will develop their interests and inspire and motivate younger pupils to follow in their footsteps. It has been a pleasure working with them, and I look forward to watching their progress through A-level and beyond.” 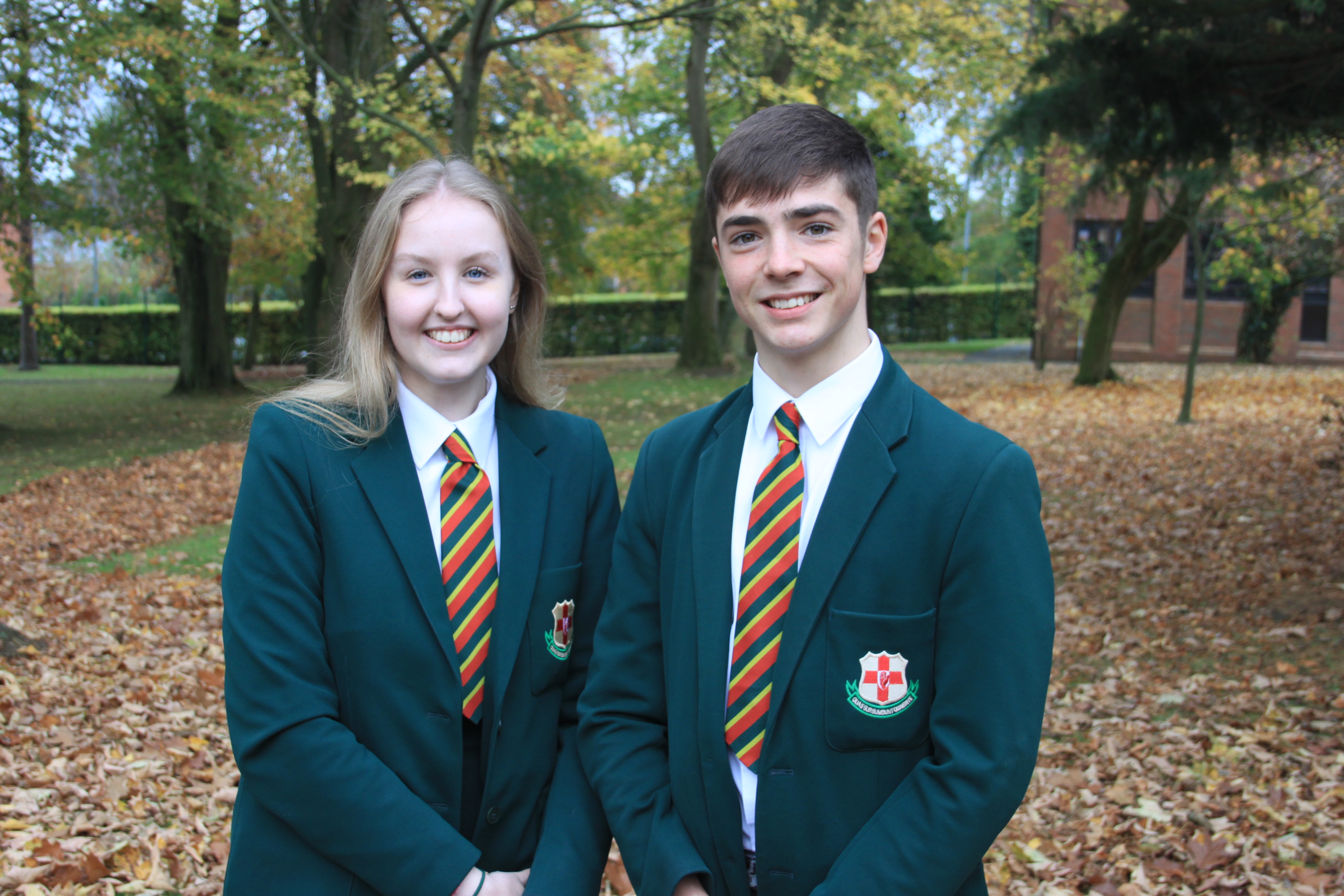 The Dr June McKeown Memorial Cup presented for Endeavour and Achievement in Science was awarded to Sophie Maxwell and Jack Netherton. 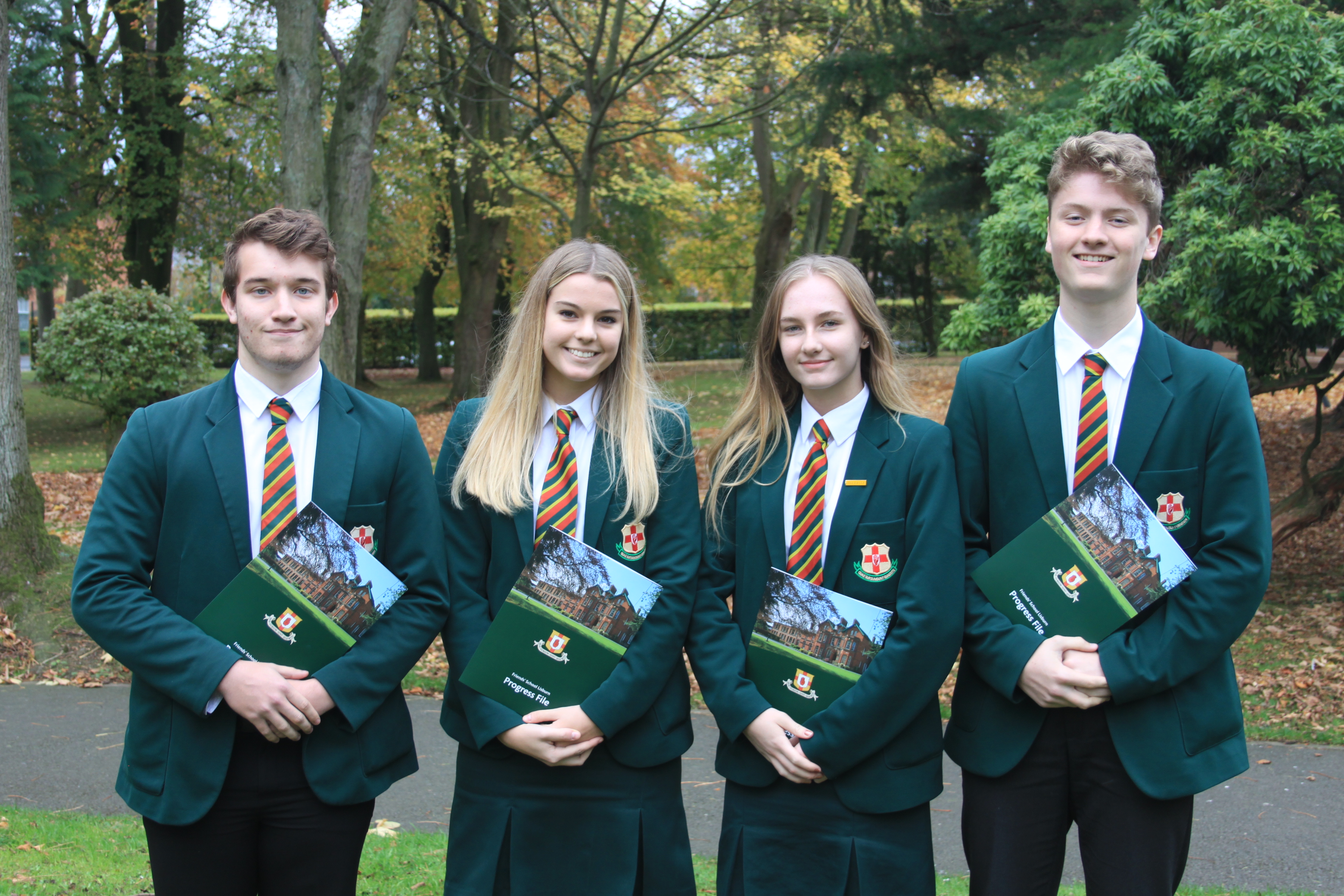 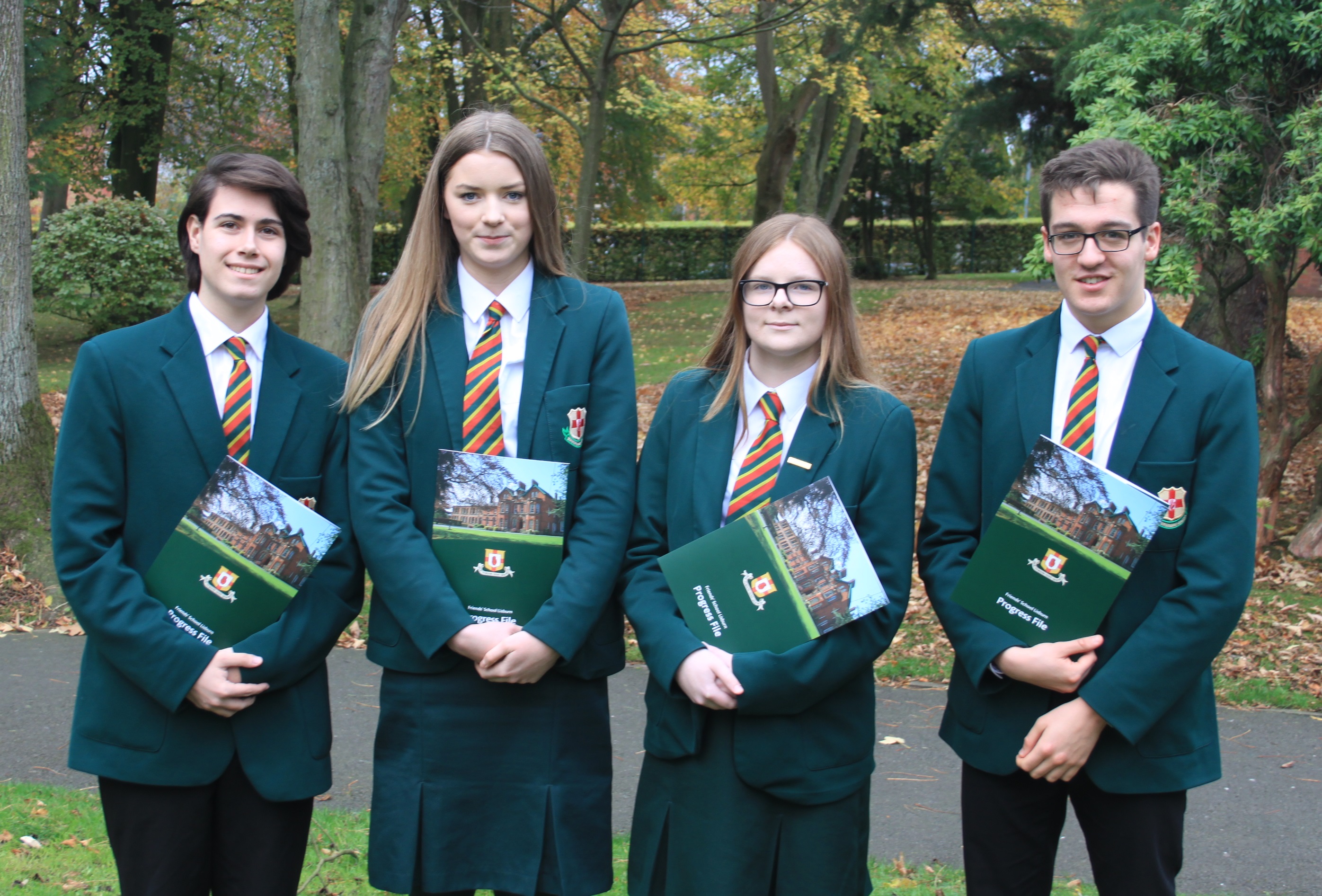 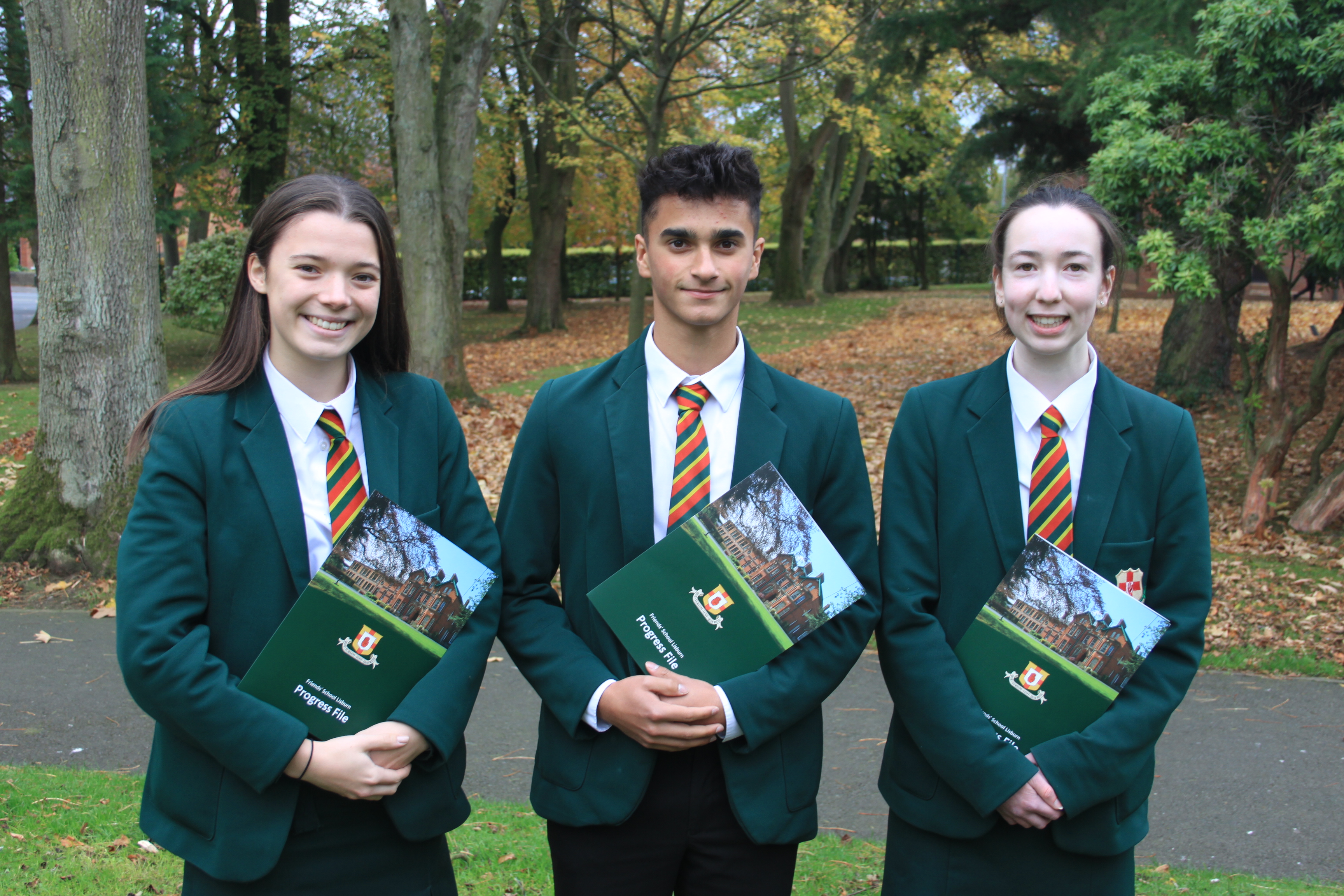 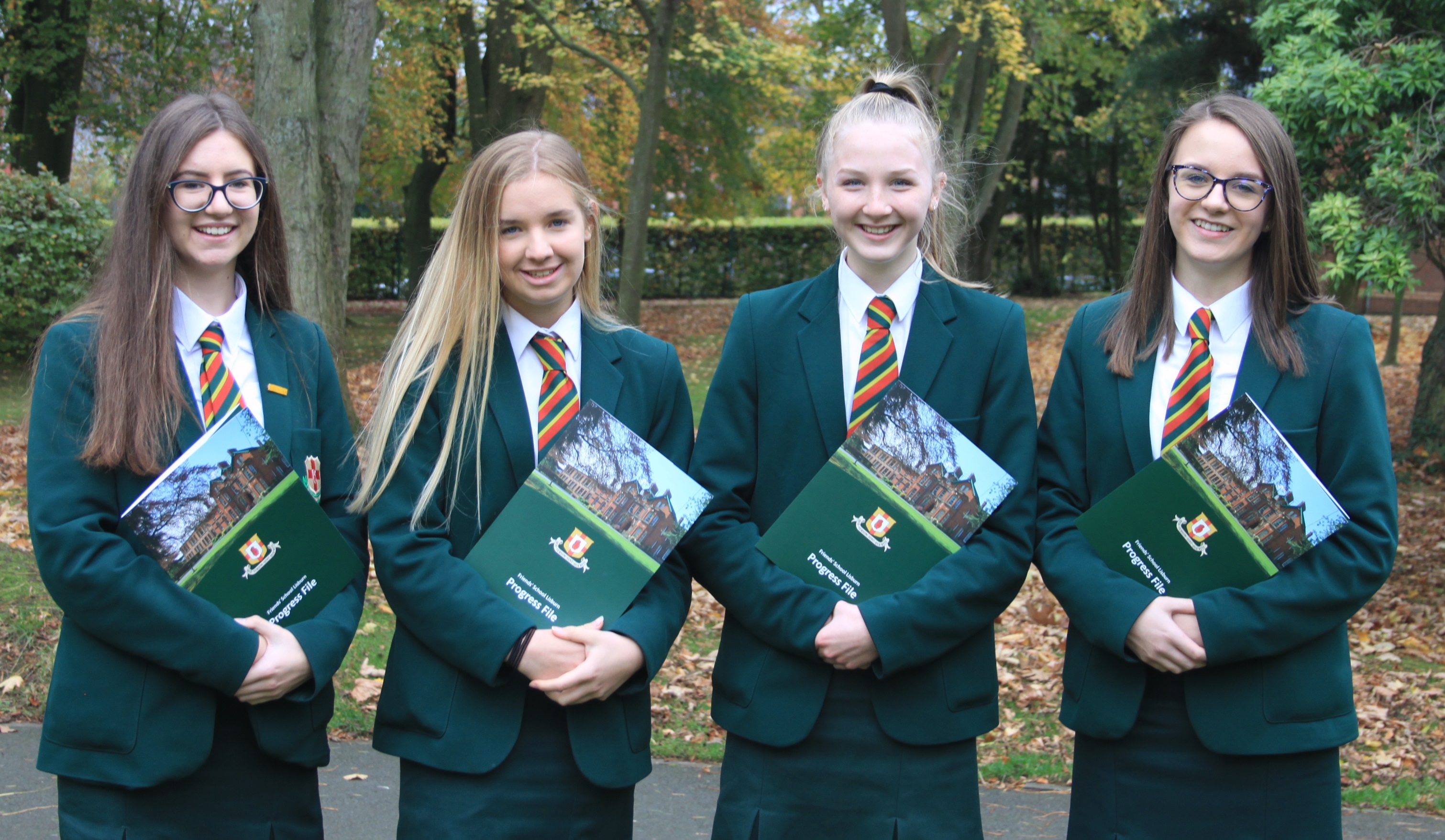