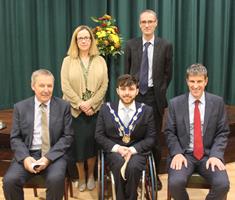 Deputy Mayor of Lisburn and Castlereagh City Council, Johnny McCarthy, who had left school in 2008, received a warm welcome back to Friends’ School when he was the Guest of Honour at the annual GCSE Reception.

The Platform Party at the GCSE Reception:

In a compelling address, he talked about his experiences in wheelchair basketball. He spoke powerfully of how, after a difficult period, he had overcome the disappointment of not being selected for the Paralympic team. He related how he had subsequently taken up the fresh opportunities that had arisen, adding that his younger self would never have imagined that he might make a career in politics. He encouraged the young people to be prepared for setbacks and to embrace failure in the knowledge that they would learn from it and that it would equip them for success in the future.

After the reception, Councillor McCarthy joined parents, staff and pupils in the Dining Hall. Some of those who had taught him and who had since retired were back in school and were keen to hear of his experiences since leaving school.

The Chairman of the Board of Governors, Philip McDonagh congratulated pupils on their achievements and thanked staff for their hard work over the past year. He said that Friends’, founded in 1774, would be celebrating its 250th anniversary in 2024 and began by reflecting on what it means to be a Quaker school today. He said that Friends’ had much in common with other schools: it was largely funded by government, it delivered the same curriculum, prepared pupils for public exams and was subject to the ever increasing list of regulations and policies that were required. There were, however, things that made the school distinctive:

“As Quakers, we believe that there is that of God in everyone. We therefore seek to support an ethos within the School that values every individual, both pupils and staff, and recognises that each of us has the potential to live fulfilling and rewarding lives. This should lead us to respect everyone, and to the development of good and inclusive relationships within the school. In practical terms, we believe in providing service to the community and we encourage pupils to participate actively by supporting organisations like Quaker Service, which works with disadvantaged families and young people in North and West Belfast.”

Stephen Moore, Principal of Friends’, spoke about the Friends’ pupils who had taken GCSE exams last summer, noting that, in awarding Progress Files and GCSE certificates to each one, the School recognised and valued the achievements, talents and interests of each individual, both within the classroom and beyond. Mr Moore said that all of the pupils present should be congratulated on their success:

“Collectively, this cohort of young people can be very proud of what they have attained at GCSE. 143 pupils sat GCSE examinations in 2019, in what was the first year of a new specification; they also faced the challenge of a new grading system in which the threshold for an A* was raised to bring it into line with a 9 in the English specifications, and which saw the introduction of a C*. However, despite the uncertainty and the additional challenges, they did very well. Over a quarter of entries were at A*; two thirds were at A*/A; and 85% were at A*-B. It can be hard to appreciate the significance of statistics, but I do hope that we can acknowledge just how much these young people have achieved.”

Mr Moore said that it would be impossible to list all of the individual successes, and that, in this year in particular, some had been achieved despite adverse personal circumstances. However, he said that it was appropriate to mention some individual achievements:

“Alexander Kyle was placed 3rd in Northern Ireland in GCSE Chemistry, while Lara Poole, another of tonight’s prize winners, came 3rd in English Literature. A total of 45 pupils achieved 10 GCSEs at A*/A; 38 pupils achieved a very impressive total of 5 or more A*s; Alexander Kyle, Dominic Wilson and Hannah Wilson each achieved 8 A*s and 2 As; and Ella Agnew achieved 9A*s and 1 A.  Old Scholars’ Prizes will be awarded this evening to eleven pupils which, despite the changes in grading, is our highest number over the last three years. Bethany Au, Alice Francey and Rachel Wilson achieved 11 A* grades, with Molly Davidson, Joshua Hamilton, Ellie Knox, Seren Mageean, Rachel McElrath, Alena Morrison, Lara Poole and Holly Thompson each achieving 10 A*s. This shows remarkable consistency across a broad and challenging curriculum: all of these pupils sat Mathematics, English, English Literature, at least one Science subject and one Modern Language, as well as Religious Studies.”

Mr Moore said that he admired the way in which pupils were able to balance their commitment to academic success with their interest in a broad range of activities. He said that the first term in Sixth Form had been a busy one with pupils involved in a variety of activities, including debating, Eco Committee and charities. They had also had opportunities to travel to Germany, as part of a long-standing exchange programme with the Remstal Gymnasium Weinstadt, and to Salamanca on the Spanish homestay visit. In addition, pupils involved in the Politics in Action group had travelled to Westminster with counterparts from St Dominic’s as part of the school’s Shared Education Project. He also mentioned the recent school production of Oliver:

“Almost 200 pupils were involved altogether, and our current Year 13 provided a galaxy of stars for the performances. As well as those who helped out backstage, designed the programme, assisted with costumes and make-up, gave their all in the chorus or played with distinction in the band, they provided most of the key performers. Kyla Grimley as Charlotte and Jamie Galbraith as Mr Brownlow both gave fine performances, as did Rachel Wright as Widow Corney, and Zack Hall and Sarah Littler as Mr and Mrs Sowerberry. Street sellers Anya Gilmore, Ellen Whitten, Anna Nixon, Jodie Marshall and Cara Kennedy all sang beautifully, as did the impressive Rachel Paul as Bet. And who could fail to be even just a little bit scared by Ryan Beckett’s interpretation of Bill Sikes, or totally convinced by the excellent Joshua Hamilton as Fagin?”

The Principal also talked about individual and collective successes in a sport, highlighting the success the girls’ hockey teams had enjoyed the previous season:

“In finals week in March, the 2nd XI set the tone by retaining the McDowell Cup, with a trio of current Y13 pupils, Thea Wilson, Kate Erskine and Alena Wilson, the scorers in the final; two days later, the 3rd XI won their competition, and there was also Year 13 representation as the 1st XI finished of a hat-trick of successes by winning the Senior Shield.”

“Life in School is busy, and there is much more that could be mentioned if time permitted. Having successfully navigated their way through GCSEs, it is good to see our pupils embrace with such enthusiasm the challenges and opportunities School offers them. I know that these young people here tonight have the creativity, the drive and the ability to make a difference in our society. It's a pleasure working with them, and I look forward to watching their progress through A-level and beyond”.