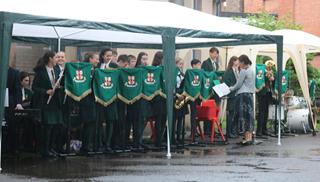 Speech Day at Friends’ School, which took place on Friday 10 September, was a little different this year because of the restrictions in place.(Left to Right: Mr S Moore, Principal, Mr S Alexander, Vice Principal, Professor Peter Shirlow, Guest of Honour, Ms S Cochrane, Vice Principal, P McDonagh, Chairman of the Board of Governors)

Social distancing requirements and a greatly reduced capacity in the assembly hall meant that two events were held: one for Year 14 pupils, to celebrate success at AS level, and another later in the afternoon, to which those who had recently completed A-levels and their parents were invited. Despite the heavy rain, the Jazz Band, sheltered under hastily erected gazebos, heroically played on and welcomed the guests as they arrived at the assembly hall.

The Guest of Honour at both events was Professor Peter Shirlow, who attended Friends’ from 1977 to 1984 and who is currently Director at the University of Liverpool’s Institute of Irish Studies. Professor Shirlow also advises the British and Irish governments and the European Union, and is a regular contributor to Radio Ulster and BBC NI, as well as the Irish Times, the Guardian and BBC Radio 4.

The Chairman of the Board of Governors, Philip McDonagh, opened proceedings by congratulating pupils on their achievements and thanking the staff for their hard work over the past year, particularly in the difficult circumstances created by the pandemic.

Professor Shirlow received a warm reception and gave an inspirational and entertaining speech to those gathered in the assembly hall. He reminisced about his time at school and spoke fondly of his time at Friends’. He said that it used to be a characteristic of speeches that young people should follow the example of older people whose success was measured by professional standing, income and status. However, it was his belief that life should not be an identikit version of the life of an older generation: this generation should create their own future, one that was inclusive, shared and confident.

Professor Shirlow spoke about the challenges of moving on to university, of adjusting expectations and adapting to a different style of working. He added that young people should not be in a hurry to achieve their goals, and that they should be aware that each one of us depends on the efforts of others to see us through life.

In a speech full of anecdote and observation, he offered ten ideas to the leavers on how to move forward in life. He said that ambition was best served cold, highlighting the fact that those who have a singular dream often miss out on others. He encouraged everyone to strive not to focus on being a success, but rather to be of value; to respect their good fortune and their debts to others, including their parents; to take exercise; to laugh; to show respect to everyone and to show leadership in the battle against discrimination.

Professor Shirlow concluded by urging the leavers to be themselves and not to let the noise of others’ opinions prevent them from having the courage to do what they felt they should. His final piece of advice was to recognise the folly of spectacle, rejoicing in difference and imperfection rather than chasing unachievable ideals.

Stephen Moore, Principal, welcomed new members of staff, including Vice-Principal Steven Alexander, and paid tribute to those who had moved on over the last year. He thanked Phillip Elliott, who had taken up the post of Principal at Cambridge House Grammar School and Lesley Rodgers who had retired as Head of Girls’ Games, for their enormous contribution to life at Friends’. Mr Moore also expressed his gratitude to Alison Rogers and Helen Calvert who had served the school in a variety of roles over three decades, most recently in Reprographics.

Mr Moore said that, despite all of the downsides, one positive aspect of the pandemic was that it had led to people taking unexpected journeys, both real and metaphorical, and that these often led to experiences which would be cherished long into the future. He observed that, despite the uncertainty created by the cancellation of examinations, pupils had risen to the challenges presented by the alternative awarding arrangements, persevering with their studies both in school and during the closure, and producing high quality work in assessments. He also commended them for their cheerful attitude throughout and said that, despite the mass cancellation of events, there were still some highlights to report from the past year. These included individual sporting achievements for those who had earned a place on elite squads, and success for the senior team in the Concern All-Ireland Debating Shield.

Mr Moore concluded his report by saying that he was grateful to the leavers for the contribution they had made to school over the last seven years, and commended them for how they had coped with the challenges of the pandemic:

“You have had to take an unexpected journey over the last two years. It would be easy to lament the missed concerts and school productions, the lack of sports fixtures and cup ties, and even the absence of formal examinations. But what I would say is that this shouldn’t take away anything from what you have achieved, both at A-level and during your time at school, and I hope that you can look back at your time here with fond memories. Your experience was certainly different, but through it you were able to demonstrate resourcefulness, resilience, determination and fortitude, and you have left school equipped not only for your degree courses, but also for what lies ahead, with all of the uncertainties that brings.” 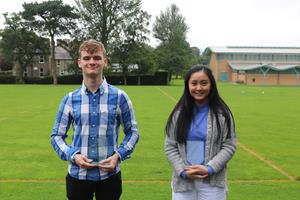 Head Girl Tilly Martin and Head Boy Patrick Bates thanked Professor Shirlow for taking the time to come to Friends’ and, on behalf of the pupils, staff, parents and guests, expressed their appreciation for what he had said. Following the ceremony, the weather had dried up sufficiently for leavers and their parents to stay for refreshments outside the Dining Hall. 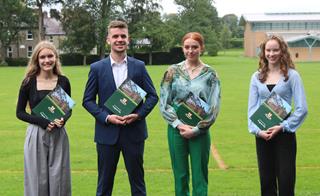 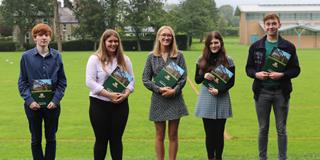 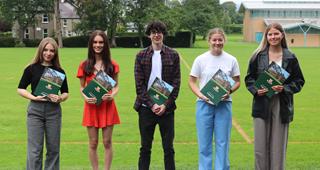 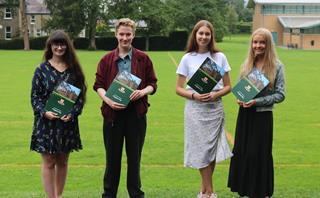 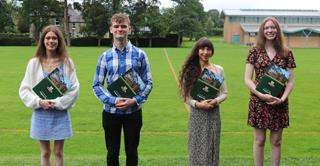 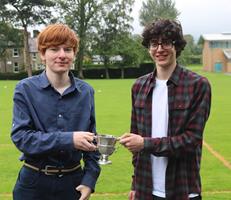 In recognition of outstanding achievement at Advanced Level the Greer Cup is awarded jointly to Magnus Naeri and James Hatchell, who also achieved 4 A*s at A Level. In recognition of outstanding achievement at Advanced Level the Manly Haughton Cup is awarded jointly to Alice Francey and Bethany Au who were both awarded 4 A*s at A Level. Matthew Aughey was awarded the Michael Thompson Sports Bursary created in memory of Michael Thompson, former Head Boy and captain of the 1st XV at Friends’, is presented to a pupil who has achieved excellence in sport and who is continuing to develop this interest at university level.

Lara Poole received the Craig Lewsley Award which is presented in memory of former pupil Craig Lewsley and is awarded to a pupil who has made an all-round contribution to school life. 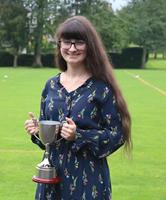 The Hilary Reseigh Cup was awarded to Ellie Knox who was the pupil with the best overall achievement in Science at A-level. It was donated to school in memory of Hilary Young, who was Head Girl here in 1988/89 and her love of Science, and Chemistry in particular, led her to a career in Pharmacy. 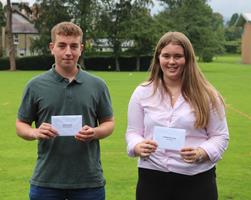 Joshua Anderson and Anna Nixon received the Sinton and Dunwoody Prizes in recognition of their services to Friends’ School.